After the hero Marksman Wanwan was officially released in the game Mobile Legends: Bang Bang, now it was Silvanna’s turn to be present at Original Server, friends

Silvana Mobile Legends itself is a hero Fighter in the form of a graceful and powerful female knight who uses a spear as a weapon.

It’s not just his appearance that you should pay attention to, but this hero has a combination of attacks that are easy to use but quite painful.

Curious about Silvanna’s hero tips and tricks? Let’s see the review first build Silvanna hurts, reviews skill, and how to use it in the game.

From his appearance as a knight armed with a spear, it was predictable Silvanna included in the hero with the Fighter class.

Different than other Fighter who rely on Physical Damage, Silvanna relied more Magical Damage like a Mage hero. As you can also meet with Guinevere, friends

Hero Fighter with specialization Initiator / Charge, is halfway between Assassin and Tank. Armed with a balance between the ability to attack while staying at close range.

Before entering into the main discussion, as usual ApkVenue will give a little commentary on the story and background of Silvanna Mobile Legends.

Stories of Silvanna Mobile Legends, Knight of the Heir to the Throne of Moniyan 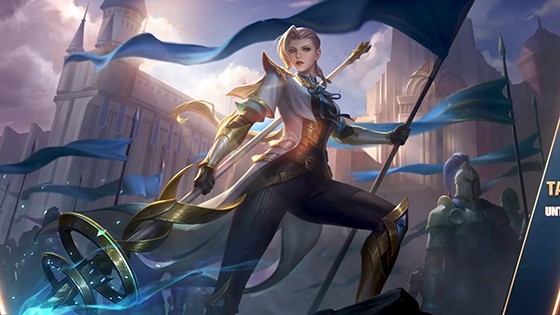 Silvanna’s formidable and charming appearance is based on the fact that this Mobile Legends heroine is Royal Princess of Moniyan.

Silvanna was the eldest son of the King and Queen Moniyan and also the older brother of Prince Aurelius II, which disappeared and eventually grew into a hero named Dyrroth.

With his trademark appearance with white armor, title Imperial Knightess alias Knight of the Kingdom is indeed very suitable for this one hero.

But make no mistake, despite his graceful and tough appearance, Silvanna can easily charge, attack, and trap enemy heroes easily. 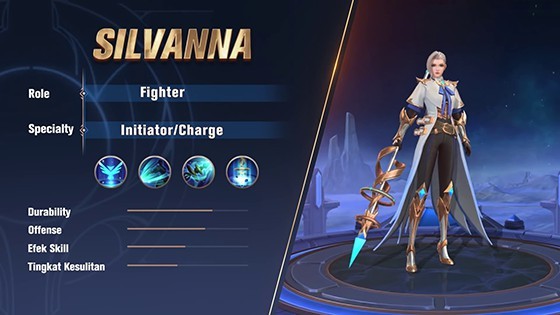 Interestingly at the time of its release, you can get the hero Silvanna Mobile Legends for free provided you have followed the special event.

If you don’t attend this event, you can buy Silvanna for the price 32,000 Battle Points or 599 Diamond where at the inaugural release you can buy for 419 Diamond only.

Apart from that you can also buy skin Elite Silvanna – Hallowed Lance for the price 188 Diamond.

As a Fighter hero who has damage Mage-style attacks, Silvanna is quite unique because it uses a combination of physical and magic power to fight.

With more than 100 heroes, it is certainly difficult to make a hero that is completely new and unique. You could say Silvanna has skill something like the previous hero.

Here is a list review skill Silvanna Mobile Legends along with a brief explanation, friends. 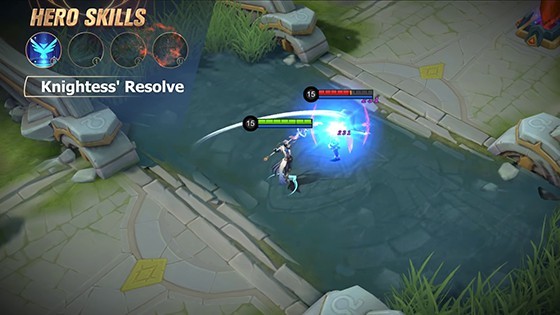 Skill passive Silvanna will leaving a Mark to your opponent which is charged when he uses skill any.

Every Mark will reduce Physical and Magical Defense the target is 3-6 and lasts for 5 seconds. Targets can receive up to 5 Marks.

When the number of Mark reaches its maximum, then skill Silvanna can give 30% damage additional to the target. 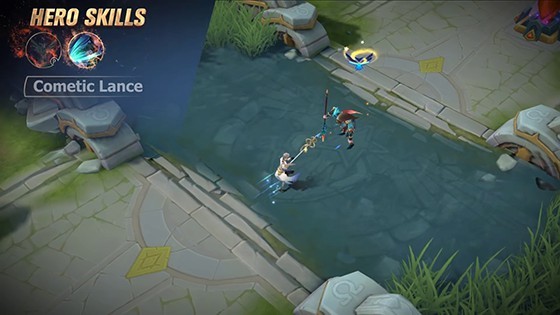 Silvanna will attack with her spear in the specified direction and give 150 (+ 70% Total Magic Power) Magic Damage.

Skill 1 Silvanna will attack all targets in its path and cause an effect Stun on the first opposing hero he uses for 1 second.

If it hits the target, skill 1 Silvanna can also be used again to hit in the specified direction.

Then carry out attacks 250 (+ 100% Total Magic Power) Magic Damage to nearby opponents. 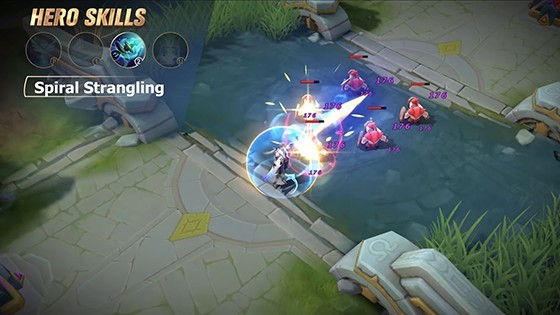 Skill 2 Silvanna will make it rotate the spear in the specified direction 6 times and will increase 1 spin every 50% additional Attack Speed.

With this attack, Silvanna will give 150 (+ 35% Total Magic Power) Magic Damage and pull your opponent a little to the middle.

Meanwhile, Silvanna also won 300 (+ 100% Total Magic Power) Shield for himself. If the target is Minion, the attack will only cause 75% Damage. 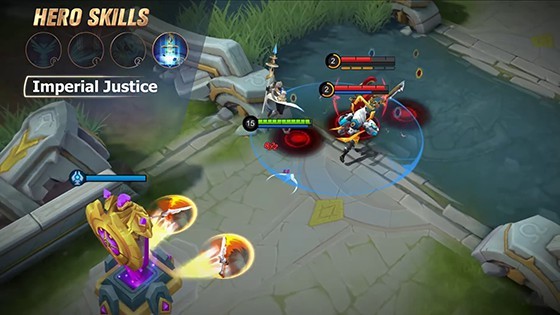 Finally, ultimate skill Silvanna will make this Fighter hero jump the specified area and give it 350 (+ 110% Total Magic Power) Magic Damage on opponents in the area of ​​effect.

This attack also has an effect Slow to the opposing hero at around 40% for 1.5 seconds.

Meanwhile, Silvanna will also create Circle of Light, where the closest opponent in the middle cannot escape for the next 3.5 seconds.

If Silvanna is in the Circle of Light, he will get 100% Attack Speed and 100% Magic Lifesteal additional.

Third skill Silvanna has the type of attack crowd control (CC) where skill 1 has an effect Stun, skill 2 can attract opponents, and ultimate skill can make an effect Slow and lock your opponent.

But you need to pay attention, effects and skill Silvanna’s lock is only valid for 1 opponent hero only. So you must be aware of other enemy heroes.

What’s more, Silvanna doesn’t have skill which can be used to escape, friends.

Although it actually is skill 1 and ultimate skill can be used to run away, but it is rather dear cooldown second skill it’s been a long time. 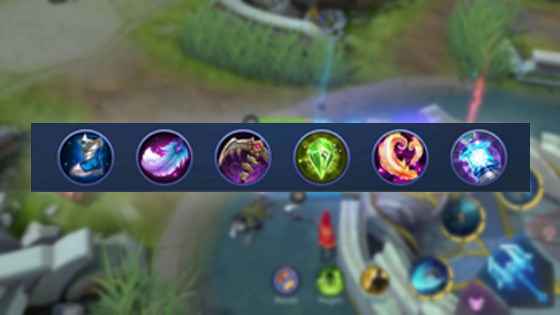 Selection battle spell Silvanna could choose from Flicker to cover up the shortcomings that don’t have skill to run away.

You can combine it with emblem set Custom Mage Emblem in addition. 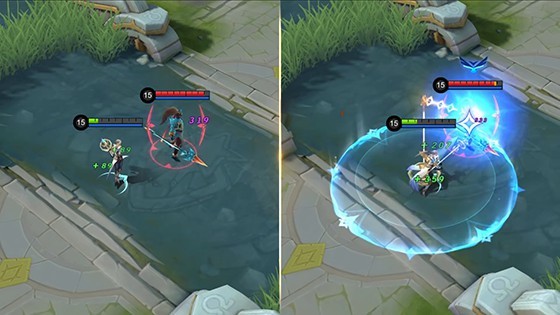 After you understand the review skill and build best for Silvanna, you also have to know tips and how to use Silvanna Mobile Legends in the match.

ApkVenue has reviewed in detail the points below. Come on, see more, friends! 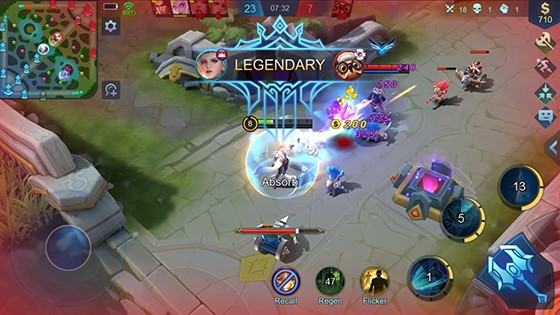 Unlike Fanny who is a hero of Mobile Legends with its use very difficult, Silvanna is fairly easy to use. But get ready, there are some weaknesses that you should be aware of, friends.

The advantages of Silvanna Mobile Legends

Well, that’s a little review of Silvanna Mobile Legends, starting from the review skill, build hurt, and tips and how to play Silvanna that you can use in the game.

Combo the attack that this Hero Fighter has is sick, but you have to be smart and do it timings right to use it.

What do you think of this beautiful Moniyan Kingdom knight? Or even have additional tips for using it?

Come on, do not hesitate to make share your opinion in the comments column and share this article to get an update the latest from ApkVenue.com, friends.