Do you want to change the sound when live streaming or playing a game? Here is a list of the best voice modification applications on Android and PC (funny sound effects, women, robots, etc.)

Have you ever thought about bullying your friends? For example with making fake noises who seemed to fool your friend.

Now armed with an Android phone or PC, you can try a few the best voice modifier application which can be used in a manner real time when making a phone call.

In addition to fun, there are also a number of voice changing applications at the moment live streaming or play games on Android that can add to the excitement, you know.

Intrigued by what are the recommendations? Come on, just look at the full review below!

The Android and PC realtime voice modifier application like ApkVenue said above can not only be used for ignorant tricks, but can be entertainment at a time live streaming or playing online games together.

Even more sound effects that you can get. For example the voice of a robot sounds, squirrel sounds (chipmunk), female and male voices, to the voices of famous characters in comics or movies.

Instead of lingering and making you even more curious, just refer to the best voice modification application recommendations below. Check this out!

First, to change the original sound when recording you can use an application called Voice Changer with Effects that you can download for Android smartphone.

Well, interestingly you Android voice modifier application is able to change your voice to various Star Wars movie characters. Starting from the sound effects of Darth Vader, Chewbacca, and many mores.

So, do you want to try changing your voice? So download and install the Voice Changer with Effects application on your mobile!

In fact this sound effect you can make yourself with a funny video application, TikTok. You just record a video and do editing by adding default sound effects that are in the application.

You can choose to makepublish video or download it TikTok videos to use the sound that you have given effect to other social media.

Then you can also try the application called RoboVox Voice Changer. This application you can download for free, although there is a paid version too.

For the paid version, you can get more than 32 choices of unique and cool sounds. Voice Changer Application real time This Android also has fairly sophisticated features.

Like the Parrot Mode feature that will imitate your voice after you finish saying it and also the interface that has a sophisticated and futuristic impression.

If you want to play tricks on your friends, IntCall – Call Voice Changer application could also be a voice changing application when calling that you can use.

Why? Because this application will change the sound you say in a way real time so that the other person will make you confused.

In addition to changing your voice, there are also some effects that can make your interlocutor suspicious. Like the effects of farts, kisses, laughter, to the crying baby. Guaranteed your ignorant efforts will not be in vain, deh!

Have you ever swallowed the wind from a helium gas balloon? Or watching YouTube the person who did it, huh? Surely your voice will turn hilarious after all!

Well, because doing this is rather dangerous, you better use a Helium Voice Changer that provides a similar effect and is no less funny.

In addition, this funny voice modifier application also provides several other sound effects that you can use for you to share with groups chat you. Want to try?

Voice Changer is an application developed by the developer AndroidRock, which can easily change your voice into various types of sounds.

Start the sound of being a robot, sound chipmunk, children’s voices, parents’ voices, to the sounds of aliens in this one sound effect application, the gang.

All of these things you can easily access armed with user interface relatively simple. Just press the button once record and select the sound mode you want.

If you are looking for a voice changer application when playing online games on Android, PS4, Xbox, or PC, the Voice Changer Mic for Gaming application can be an option.

This application has several choices of sound effects from famous characters in the film, such as Darth Vader, Kylo Ren, Bane, Batman, to Optimus Prime, the gang.

Because of some limitations, to use it you need some additional equipment, like audio splitter and AUX cable.

But, the developer gave a complete tutorial on how to operate Voice Changer Mic for Gaming that can be followed easily, really! 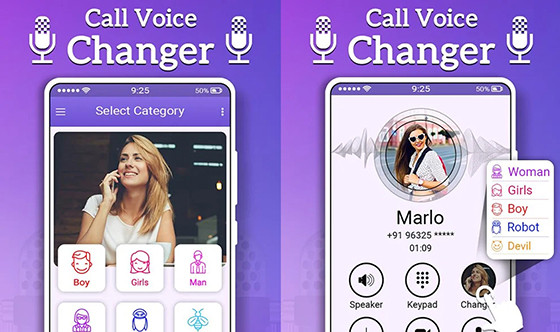 One more voice changing application when calling that you can use is Voice Changer During Call Male to Female that can be used for your girlfriend’s ginger, here.

As the name implies, this application is recommended for turning male voices into female voices with various options. Like the voice of girls, teens, and adult women.

Voice Changer During Call Male to Female also functions as a telephone recorder application because it provides this feature in its application. So, you can turn it back after ignoring people.

Voice Changer Sound Effects provides you with the option to change sounds into unique and interesting effects for you to try.

Almost like an application voice changer aka other similar voice modifiers, you can change the normal sound to a variety of sound effect options provided.

Like Helium, Hexafluoride, Fast, Slow, Cave, Chipmunk, Monsters and many more. In addition to recording your own voice, you can also add sound effects to songs stored on the cellphone. 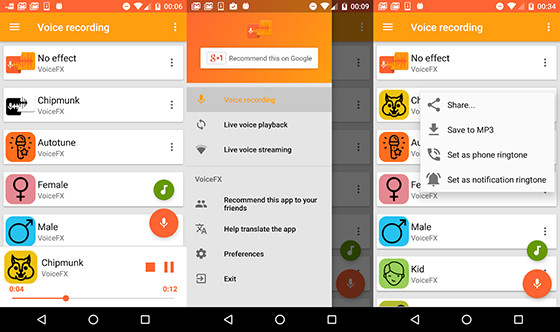 The next Android voice modifier application, you can also use VoiceFX which is able to change while recording sound with various effects in it.

You can also use VoiceFX as a voice changer application when live streaming on Android that will run automatically in the background and change your voice.

In addition, VoiceFX is perfect for playing games with friends, such as PUBG Mobile or Free Fire, while doing voice chat during play.

Meanwhile for the PC voice modifier application there Clownfish Voice Changer which is already widely used by YouTubers gamers, both in changing the sound when live streaming or giving sound effect.

Clownfish Voice Changer also supports the use in several software, such as  Skype, Steam, to Discord to play games online with the squad.

Sound effect options vary, where you can choose 14 different sound effects that can be used by simply clicking on the panel displayed on the screen. 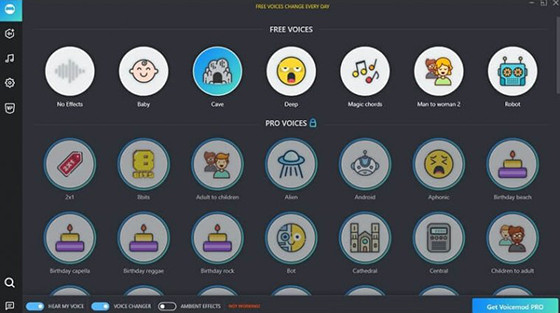 Besides Clownfish, you can also choose Voicemod which is claimed to be compatible with several software and PC games, such as VRChat, Discord, Overwatch, Fortnite, and PUBG.

Even for those of you who like streaming, the voice modification application on this PC has also been integrated with Stream Deck and OBS Streamlabs, you know.

For now, the new Voicemod supports the Windows operating system only. But going forward, parties the developer promising this application also runs on Linux and MacOS.

And that’s the collection of recommendations for the best voice modification application on Android phones and PCs that you can use to record, call, live streaming, or play games with friends.

Which is the best for you? Or even have other recommendations? Don’t forget to share your opinion in the comments column below. Good luck and good luck, yes!