ApkVenue
Confused looking for a TV remote that sometimes goes where? Now there are also some of the best TV remote applications that you can use on an Android phone (practical).

Have you ever experienced a TV remote that was lost when you needed it? It must be really frustrating, right?

So you don’t need to worry, the article is armed only with an Android smartphone you can already replace the TV remote function.

So this time ApkVenue recommended a number of the best TV remote application for Android HP which is guaranteed to solve your problem. 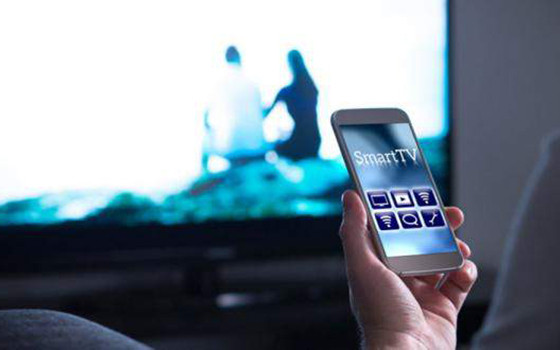 Android phones are predicted to replace the function of a number of other technological devices, including a TV remote that functions to regulate television or other electronics.

And armed with TV remote application best as will be reviewed below, you don’t need to bother anymore when changing channels guys. 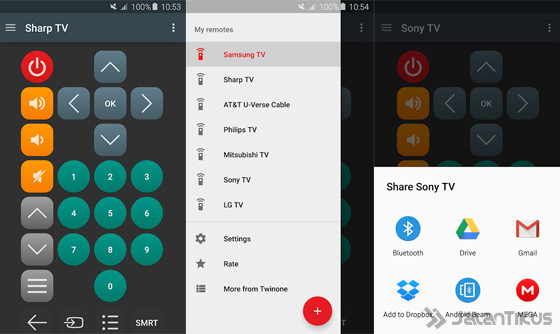 Universal TV Remote indeed be tools on an Android smartphone to change your smartphone like a TV remote.

Suitable for you who don’t need a lot of features guys. 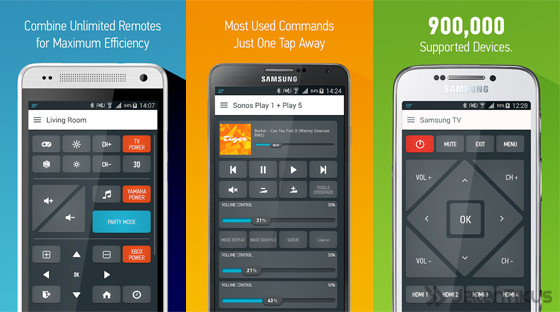 Android TV remote application developed by Color Tiger This has indeed been tested on several smartphones, such as Samsung, HTC and so on.

Unfortunately AnyMote is not compatible with Huawei, Vizio, Sony and some LG smartphones guys. 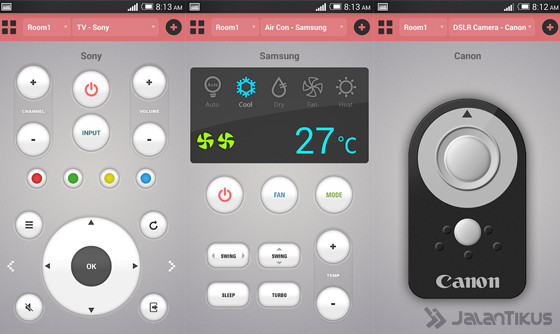 Asmart Remote IR is an application developed by NXRsoft and does not only support the operation of television sets.

But it can also be used on air conditioners, DSLR cameras, DVD / Bluray Player, projectors to settop boxes.

As the name implies, the operation of the Asmart Remote IR only requires IR blaster module which is already commonly found on Android phones today, like Samsung and HTC. 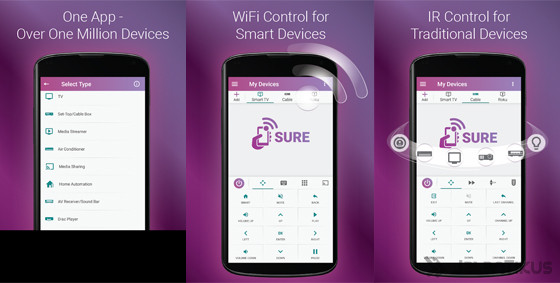 With more than 10 million downloads, it seems you don’t need to doubt the Android TV remote application developed by SURE Universal Ltd. this guys.

SURE Universal Smart TV Remote Control claimed to be the greatest application in its class because it can be used on almost all types of TVs.

Not only through IR blaster, this application also has a WiFi connection even for Amazon Alexa tablets. 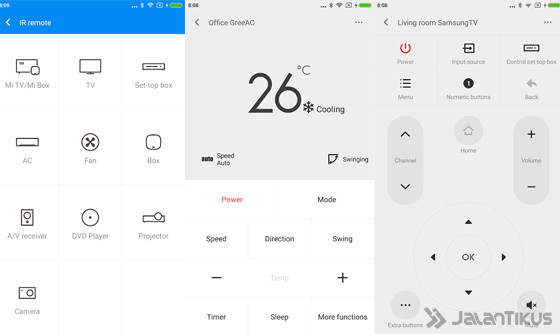 It seems that this application is mandatory for use on all Xiaomi smartphones today.

The reason is, Mi Remote Controller it was created to maximize the function of the IR blaster on their Android smartphones.

Uniquely, at this time you can also use applications developed by di Xiaomi Inc. This is on all smartphones outside of Xiaomi.

With a variety of device support, you will definitely not be disappointed. 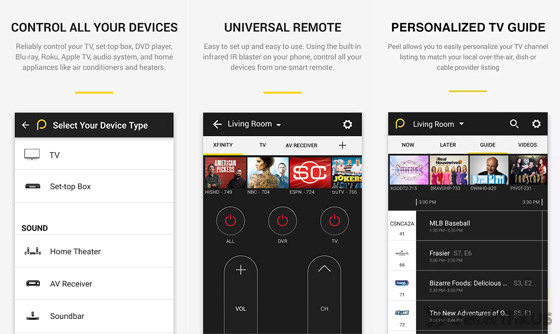 To maximize the Smart TV functions that are starting to bloom now, Peel Universal Smart TV Remote Control you can use guys.

The thing is the application developed by Peel Technologies Inc. It has a number of useful features.

Not only makes the control for electronic devices, but also provides recommendations for television shows if you connect with a Smart TV device.

No need to worry about missing your favorite shows, right? 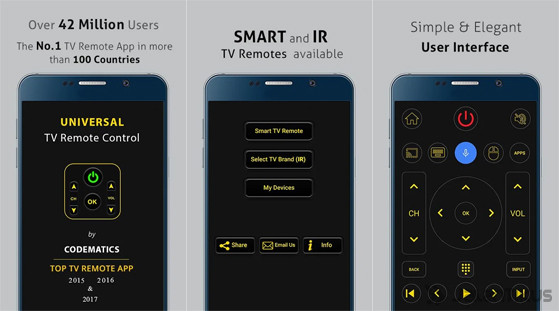 In addition to operating traditional television sets, Universal TV Remote Control You can also use it for Smart TV.

There are even some features like Smart Sharing / Casting, to display content on Android to the TV screen.

And for Smart TV devices like Sony Bravia, the application developed by CodeMatics Media Solutions It has a voice search feature or Voice Search Feature. 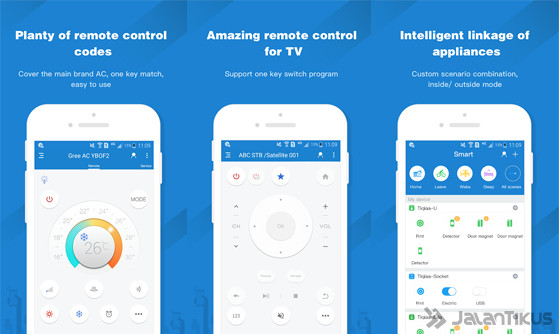 Zaza Remote same as other TV remote applications that make it easy for you to connect the TV set with a smartphone.

ZaZa Remote can be used on smartphones such as Samsung, Xiaomi, Huawei, Oppo, Lenovo, HTC and many more.

Not only has support for TV, you can use ZaZa Remote for air conditioners, settop boxes, projectors, DVD players, DSLR cameras, lights and so on. 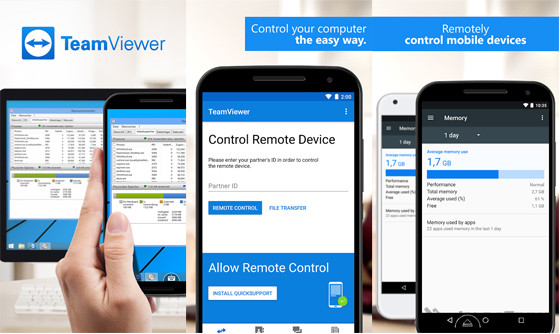 If you use the computer more often as a television, you can use it TeamViewer for Remote Control to control it remotely armed only with an Android smartphone.

Well, the TeamViewer application is known to be very suitable for work productivity and facilitates cross-computer use the platform.

So you don’t need to worry about this connection guys. 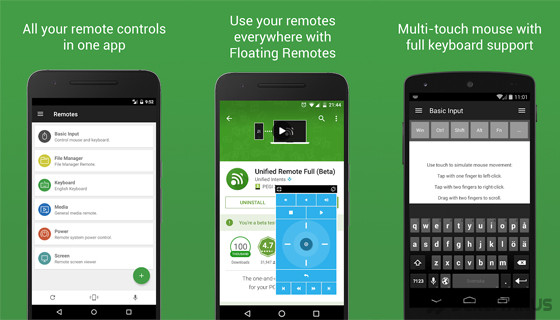 Many options for enjoying television shows today, one of them through a computer.

Unified Remote can be used to be a TV remote application that connects the TV and the computer you are using.

Unified Remote is very useful for managing Windows, MacOS and Linux computers. Moreover, equipped with fairly complete controls, starting from the input mouse to the keyboard it has.

Well, that is the recommendation of 10 best Android TV remote applications in 2018 that you must try guys.

This way you don’t have to worry about forgetting your TV remote again, running out of battery or other problems. What do you think?