Sometimes the various exposure to problems that hit us makes us seem to run away from the reality of life. I wanted to run to a place to hide.

Eits, please don’t. Whose name is the problem that must be faced, not run. But for stress relievers, you can play that game run around.

ApkVenue already made it a list of the recommendations of the 20 best running games on Android! 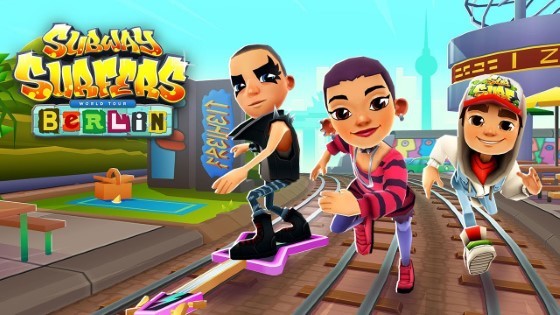 If you like it free games (who also does not like free), then the game with the genre endless run will suit you.

The proof, the recommendations that ApkVenue will give below are all free. This type of run-game is indeed one of the most popular, and even more is downloaded 1 billion time!

Besides being free, this running game on Android is offline, so you don’t need to worry about bad signals or running out of quota.

Already impatient? Let’s just look at it. You can also see other games that you can download directly in the article below.

Who was curious about what running games were downloaded more than a billion times? The answer is Subway Surfers produced by Kiloo.

This game is contemporaneous with Temple Run 2 and Joyride Jetpack. The core of the game is the same, you should be able to run as far as possible while avoiding the upcoming trains.

More than 28 million people have already given a review of this game and get a rating 4.5. New arenas are always available so you don’t get bored easily.

In the 19th century, gold fever occurred in many parts of the world, from Canada to South Africa. We can feel the sensation by playing games Rail Rush.

By using a typical miner’s trolley, you will enter caves to collect gold.

Not only in one lane, you also have to move lanes to avoid obstacles.

If this one feels like you’ve played, because this game is so popular. This is evident from the number of downloads more than 500 million time.

Temple Run 2 is a game endless run produced by Imangi Studios and is the sequel to the first Temple Run series.

Although including games old, Temple Run 2 trying to always present new things, such as characters and arenas.

The essence of this game remains the same, you have to run and jump to escape from the pursuit of the wild beast behind you!

For game fans Tomb Rider, of course familiar with the name Lara Croft. Moreover, the wide screen film is quite interesting because it is played by Alicia Vikander.

On game Lara Croft: Relic Run, you will pass various obstacles with typical movements of Lara Croft. You will go through various places such as forests, deserts, and mountains.

Besides running, jumping, and swinging, you can also use vehicles like ATVs. Don’t forget to increase Lara’s abilities so you can run further.

Are you bored with three-dimensional running games? Want a simpler game? Jetpack Joyride from Halfbrick Studiosis the answer!

This game includes old games that have existed since the beginning of the emergence of Android. However, there are still many fans of this game because gameplayits fun and addictive.

Moreover, many choices of costumes that you can wear for your character.

Of course, don’t forget to collect coins so you can buy various items to improve your abilities!

The 90s generation must be familiar with the characters Sonic Hedgehog from SEGA. What we most remember about him is his speed in running.

Just like a game endless run other, Sonic Dash 2: Sonic Boom make the player must continue to run as far as possible and collect as many items as possible.

Are you a typical person who doesn’t like to run aimlessly? Or the type of person who gets bored easily with games just like that? Try this one game!

Rodeo Stampede: Sky Zoo Safari makes you explore savanahs to hunt animals and put them in your zoo.

With a lasso, you must be able to catch and ride various animals, such as bison, elephants, ostriches, and so on.

There are even animals that only exist in your fairy tales!

How come the recommendations have only contained people or characters anyway? Are there any other variations so that we are not bored? Hohoho, of course there is, ApkVenue will always give you complete information.

You can play the game Smash Hit where you move a ball to get through various obstacles that block your path.

Soundtrack from this game is so calming, so you will feel calm during play. Moreover, this game has no ads!

You will play a chicken who wants to cross a crowded street. Not only roads, there are also railroad tracks up to the river with crocodiles lurking prey.

Of course you can play other animals besides chickens. You can get it by collecting coins during the game.

The retro design of the game is also the main attraction.

Who likes the little yellow character from the animated film Despicable Me? minion has indeed become one of the characters favored by many people of various ages.

Minion Rush: Despicable Me Official Game is an official game produced by Gameloft. This game is so popular and has been downloaded more than one hundred million time.

Arena used was in accordance with the original version. Keep running and collect as many bananas as possible to unlock other characters!

The next running game that ApkVenue recommends is Alto’s Adventure from Noodlecake Studios Inc. This game has been awarded as Game of the Year.

Gameplay more or less the same as Joyride Jetpack, where players run in two dimensions from left to right, but are guaranteed to be more difficult.

This game is based on sports snowboarding. You can collect six different boards and do cool tricks.

Moreover, the music of this game is very tasty and quite soothing! Suitable to play when relaxed.

When you play the game Whale Trail Frenzy This one, you will feel thrown into a few decades ago where a picture of flowers and signs peace scattered in various places.

This game also has a mellow soundtrack so that it can bring you carried away.

Moreover, you will control flying whales that try to avoid the gloomy clouds that can grab us.

All you need to do when playing this game is to fly as far as possible and collect bubbles with various colors that will make your trip easier. 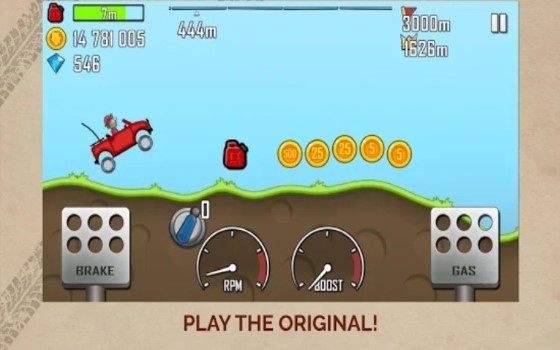 Actually, nothing runs in the game Hill Climb Racing. There are only people who drive various vehicles to drive as far as possible.

Because on this list there are balls and whales floating, ApkVenue decided to enter this legendary game.

After all, the purpose of this game is also the same as the other games on this list.

There are lots of vehicles or arenas that you can play. Make sure you can control your car properly or the driver will experience a broken neck!

If you are looking for a tense endless run game, ApkVenue strongly recommends you to play the game Into the Dead 2 this one. Guaranteed, this game is really hard!

Besides running without limits, this game is also combined with survival elements. You have to keep running while avoiding the hordes of zombies targeting you.

With HD graphics owned, this game has the potential to make you addicted. Moreover, there are many types of weapons that you can use to get rid of zombies that are blocking you.

Don’t get confused between games Subway Princess Runner with Subway Surfer, because the two games are different. Well, even though the game concept is exactly the same.

You are tasked with moving a beautiful princess who is trying to escape from the police. You have to keep running while avoiding trains and buses passing by.

To be more challenging, this game is also equipped with missions that you must complete in order to get important items that you can use in the game. 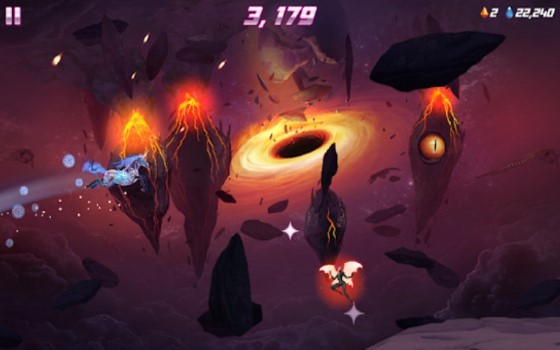 The game Unicorn Robot Attack 2 This one will also give you a different playing experience. Keep in mind, this game is not included as a unicorn company in the world.

You will control a unicorn that can emit rainbow rays and jump over various places. This game is also accompanied by music inspired by the 80s.

Interestingly, you can customize the unicorns you use. Add wings, turbo booster, until the new horn. 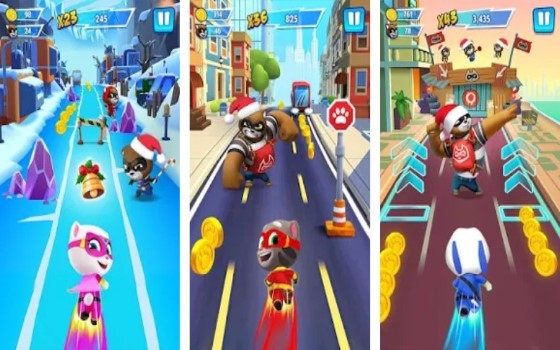 We know that the Talking Tom game is a pet game that allows us to have virtual cats that can talk.

But did you know that this game series has endless running genre games? The game is titled Talking Tom Hero Dash – Run Game.

As the title suggests, Tom (and Angela) characters will have superpower abilities when they run!

They will face enemies in the form of raccoons who will hold you back throughout the game.

Developed by PlayStation, game Run Sackboy! Run This one is quite unique. Especially if it wasn’t for the character who looked like a doll made by grandma.

You will explore many unique characters and locations from the LittleBigPlanet game. Not only that, you can also customize your character.

This free game is praised for its charming graphics and simple gameplay.

Lots of unique endless run games. One of which is Mars: Mars. The uniqueness of this game lies not only in the repetition of the word Mars in the title, friends!

Usually, endless games have a goal to run as far as possible on the available paths. In this game, you must be able to jump from platform to platform.

If you miss, it means that destruction will happen very quickly. In other words, you should be able to touch the platform as long as possible.

The last game on this list is Bendy in Nightmare Run retro style. When playing this game, you will remember Disney cartoons in the 20s to 30s.

With its retro animation style, you will feel a different sensation when playing this game. Many of the features of this game are the same as the previous games.

You will continue to run without stopping as long as you can get through the various obstacles available, defeat the boss, and collect various items to unlock many things.

How, playing run-game can make you forget for a moment your life’s problems right? So, don’t ever run away from reality, you better just run in the game!

Moreover, games with this genre usually make us addicted because they always want to break the highest score that we make ourselves.